ARTICLES
Effects of Globalization on Water Resource in India

Many nations which have a fair estimate of their oil and mineral resources, hardly know their water resource potential. In a country like India, where the rainfall pattern is highly variable and most of the people depending upon agriculture and allied activities, the appraisal and planning of water resources has became an important components for its development

The economy of any country is resource based. Man has used his technical skills andknowledge in utilizing the resources in one way or the other. Resources, in general, are defined as features which are useful and needed by man. It can also be defined as anything from living and nonliving environment to satisfy the human needs and wants. Natural resources vary greatly in quantity, mutability and reusability in space and time. Ournatural resources are hidden to us and no accurate estimate can be made of their actual quantity or amount. The very term, ‘natural resources’ tells us that only nature is their manufacturer and what we consume is lost forever with frequent guess as how much of these hidden assets are infact, how much longer they can last or how many more people they can support. 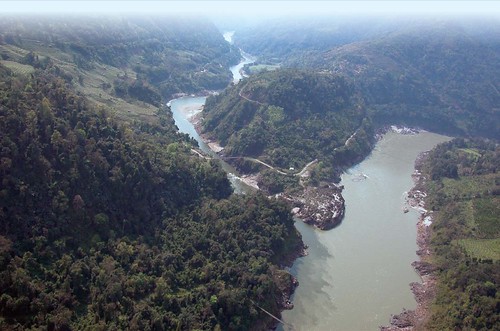 Water resources: Water is indispensable for the existence and survival of life on earth. With the advancement of civilization, water has found in the large and progressively increasing list of uses. Many nations which have a fair estimate of their oil and mineral resources, hardly know their water resource potential. In a country like India, where the rainfall pattern is highly variable and most of the people depending upon agriculture and allied activities, the appraisal and planning of water resources has became an important components for its development. The following table shows the global distribution of the fresh water. 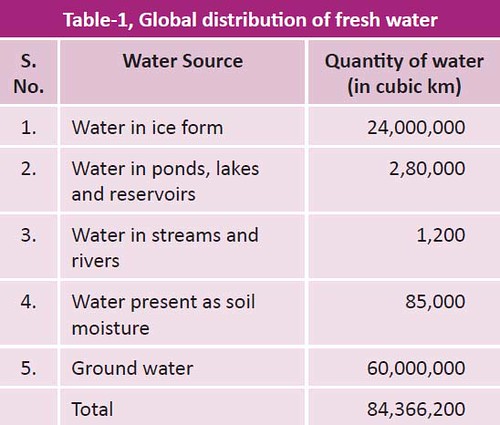 Importance of water: Water is needed in almost every sphere of human activity. It is required for direct consumption for washing, cleaning, cooling, waste disposal and transportation. Water is essential for the Irrigation, Industries, Livestock management,Thermal power generation, Domestic requirements, Hydro-electric generation, and various human activities. 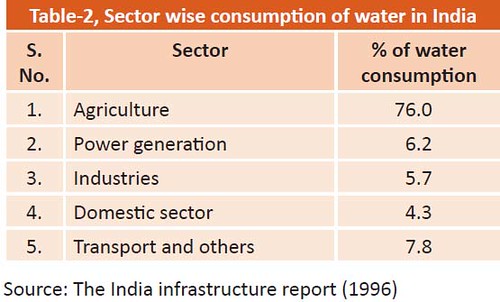 Estimation of fresh water requirements of various sectors: The amount of water in the world is finite. A third of the world’s population lives in water-stressed countries now. By 2025, this is expected to rise to two-thirds. There is more than enough water available, in total, for everyone’s basic needs. The UN recommends that people need a minimum of 50 litres of water a day for drinking, washing, cooking and sanitation. In 1990, over a billion people did not have that. Providing universal access to that basic minimum worldwide by 2015 would take less than 1% of the amount of water we use today. But we’re a long way from achieving that.

India is one of the wettest countries in the world, with average annual rainfall of 1100m.m. There is, however, no accurate information about India’s water resources. Narottam shah of the Bombay based centre for monitoring Indian economy, stated: “Unbelievable as it may seem, till now we have no arrangements in this country to compile and publish on an annual basis, comprehensive data regarding various aspects of water which are important for policy analysis and programee formulation and for monitoring the efficiency of use of our scare water resources.” The following table explains the fresh water requirements of various sectors. 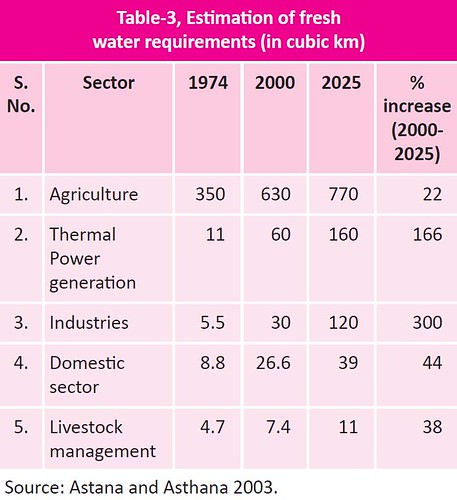 Threat to India’s water resources: Water has become the biggest problem of the 21st century. Global consumption of fresh water increased six fold from 1900 to 1995, at a rate greater than twice the rate of population growth. If the present trend continued, two out of every three people on earth will have to live in water stressed condition by the year 2025. About 25% of the world’s population does not have access to safe drinking water, and 40%does not have sufficient water for adequate living and hygiene. More than 2.2 million people die each year from diseases related to contaminated drinking water and poor living conditions, faced with water scarcity. The pre capita availability of fresh water in the country has dropped from an acceptable 5, 180 cubic metres in 1951 to 1, 820 cubic metre in 2001. It is estimated that it would drop to 1,340 by 2025 and 1, 140 cubic metres by 2050. The following are all the major threats to India’s water resources.

Population Explosion: Population growth is spurring a demographic change, especially as towns become cities and cities become metropolitan cities. Concerns on availability of fresh water have arisen, since India with 16% of world’s population has only 2.5% of the world’s land resources and 4% of the fresh water resources.

Industrial farming: Industrial agriculture has emerged as the worst depleter and polluted water, as industrial farming increases water use by a factor of ten, it leads to ground water withdrawals beyond recharge capacity, thus driving the push for large dams and intensive irrigation projects. Pollution by agro-chemicals has contaminated drinking water sources.

Water exploitation by multinational corporations: The biggest problem India faces in protecting its water resources is that it does not have effective laws to control water exploitation by multinational companies and large corporate. Noted human rights activist Water Morehouse (USA) said in 1960, the global wealth held by corporate was just16 percent. But it increased to 24% in 1970 and 32 % in 1990.

Water Privatization: During the Economic Liberalization period in 1990’s a set of measures favouring total reduction subsidies, full cost recovery, privatization, etc. has been promoted around the world. This logic has extended to the water sector as well. The world has witnessed increasing privatization of public sector water utilizes in several countries. From the eighth plan onwards, water has come to be treated as an economic good like any other commodity in India’s official planning commission documents. An expert group on commercialization of infrastructure constituted by Ministry of Finance, Governmentof India (1996) recommended several measures to operate infrastructure projects, including urban water supply and sanitation, on commercial lines either by private parties or through public private partnership. 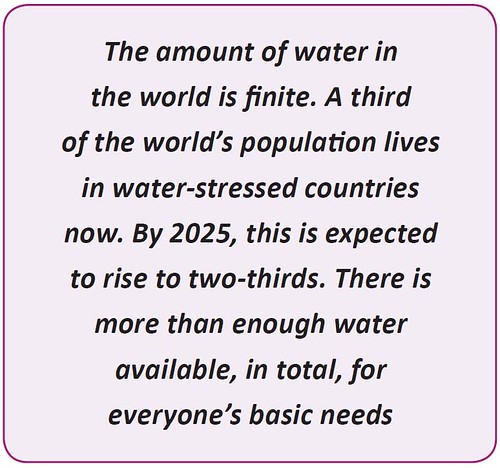 Conclusion: As a global community, we put high demands on existing water resources. In some cases, perhaps more in the future, this becomes the source of international conflict. In many cases, we use water unwisely. The water available for use on Earth is finite, and if we are not wise in it’s use, clean water will become a globally scarce commodity, as it now is already in so many places. Many solutions are being proposed to solve the problem, but most certainly all these solutions will have trade-offs and costs. No one solution will solve our water scarcity global problem. Soon after independence, the government of India adopted a policy of rapid economic development through extensive and intensive exploitation of natural resources. Unfortunately the Government has allowed private individuals corporate bodies and multinational corporations to encroach upon public lands and literally loot and destroy water resources. The rich and the powerful have gradually but surely appropriated the country’s natural resources in their favour. The post-liberalisation period since 1991, with the advent of the multinational capital, has made the hold of these powerful groups on natural resources and the state machinery much stronger. The enthusiasm of the state in executing large water projects through these groups is not matched even remotely by the concern in practice to extend clean water supply to the poor on a sustainable basis. The need for water is continuous and the quantity requiredpercapita per day is several times higher than that of food grains. Availability of cleanwater, transportation and storage over long distances and duration are difficult propositionto tackle in crisis situations. Instead of simply mentioning clean water as an input in food, the right of food compain should strongly incorporate right to water in the struggle againsthunger and starvation.